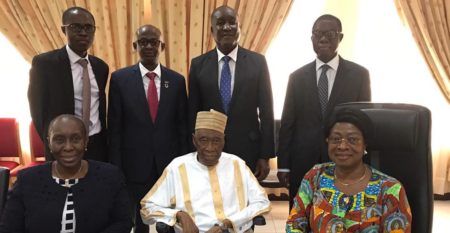 The National Committee of the International Chamber of Commerce, ICC Ghana has paid a courtesy call on the Chief Justice, Her Ladyship Sophia Akuffo to congratulate her on her appointment and to introduce the ICC International Court of Arbitration. The delegation comprised of the Chairman of ICC Ghana Alhaji Asoma Banda, Ghana’s representative to the Court, Nene Amegatcher, Fmr Attorney General, Mrs Marietta Brew Appiah-Opong, Mr Kwabena Adu Kusi member of the Court and the Secretary General of ICC Ghana, Mr Emmanuel Doni-Kwame. The delegation briefed the Chief Justice on the work of ICC Ghana and the ICC International Court of Arbitration and she accordingly communicated her good will message. The visit was to inform her of some of the programmes that ICC Ghana is working on to help train lawyers and judges especially in the area of dispute resolution.

The Chairman AlhajI Asoma Banda in his address stated that the International Court of Arbitration® is the world’s leading arbitral institution. Since 1923, the ICC International Court of Arbitration have been helping to resolve difficulties in international commercial and business disputes to support trade and investment. ICC performs an essential role by providing individuals, businesses and governments alike with a variety of customisable services for every stage of their dispute.

He said his motivation for the promotion of the work of the court of arbitration in Ghana came as a result of the numerous judgement debt awards being accrued by the state as a result of lack of adequate training of state attorneys and lack of information particularly in cases where ADR avenues could have been employed. ICC Ghana with support from the world business organisation ICC would be running training programmes in international commercial arbitration. Approximately 10 percent of ICC arbitrations involve a state or a state entity. ICC arbitration is chosen for disputes involving states or state entities in all parts of the world, although there is a concentration of cases from Sub- Saharan Africa, Central and West Asia, Central and Eastern Europe. Between them cases from these regions account for about 80 percent of ICC arbitrations involving states and state entities. Cases cover both commercial and investment disputes. Claims arising out of commercial contracts constitute the largest category of cases and most frequent kinds are those relating to construction, maintenance and the operation of facilities or systems.

The Chairman made an official request to the Chief Justice to support ICC Ghana in its effort to make Ghana a place of arbitration and the possible setting up of an ICC hearing centre for Sub-Saharan Africa in Accra, such that Ghanaian corporate bodies would be encourage to use the ICC mediation and arbitration rules and clause in their contracts and also insist on Ghana as a genuine place for arbitration helping save cost, since currently most cases are held overseas, the state and businesses spend so much in getting their cases heard overseas he stated.

The Chief Justice welcomed the team and said the intentions wouldn’t have come at the right time, with the numerous cases in the commercial courts which she believes are not necessary particularly with the passing of the ADR act which encourages parties to go for arbitration, but the issues has always boiled down to the issue of credibility, because this avenue would be sought when parties are confident that the case would be handled genuinely and judgement would be fare. She said she is happy that a well-recognised body like the ICC, which has gotten systems in place, is embarking on a project like this. She recounted her experience in Mauritius which is gradually becoming a place for Arbitration in Africa said that ICC Ghana should liaise with the Judicial Training Institute on the development of training programmes for lawyers and judges.

The Secretary General then informed the Chief Justice that ICC has established a Nominations Committee made up of prominent retired Judges of the Supreme Court to propose arbitrators to the ICC International Court of Arbitration.

The Chief Justice thanked the delegation for the visit and said it was special to her since the work of ICC compliments her work.

About The International Chamber of Commerce (ICC)

ICC is the largest, most representative business organization in the world. Its hundreds of thousands of member companies in over 120 countries have interests spanning every sector of private enterprise.

A world network of national committees keeps the ICC International Secretariat in Paris informed about national and regional business priorities. More than 2,000 experts drawn from ICC’s member companies feed their knowledge and experience into crafting the ICC stance on specific business issues.

The United Nations, the World Trade Organization, the G20 and many other intergovernmental bodies, both international and regional, are kept in touch with the views of international business through ICC.